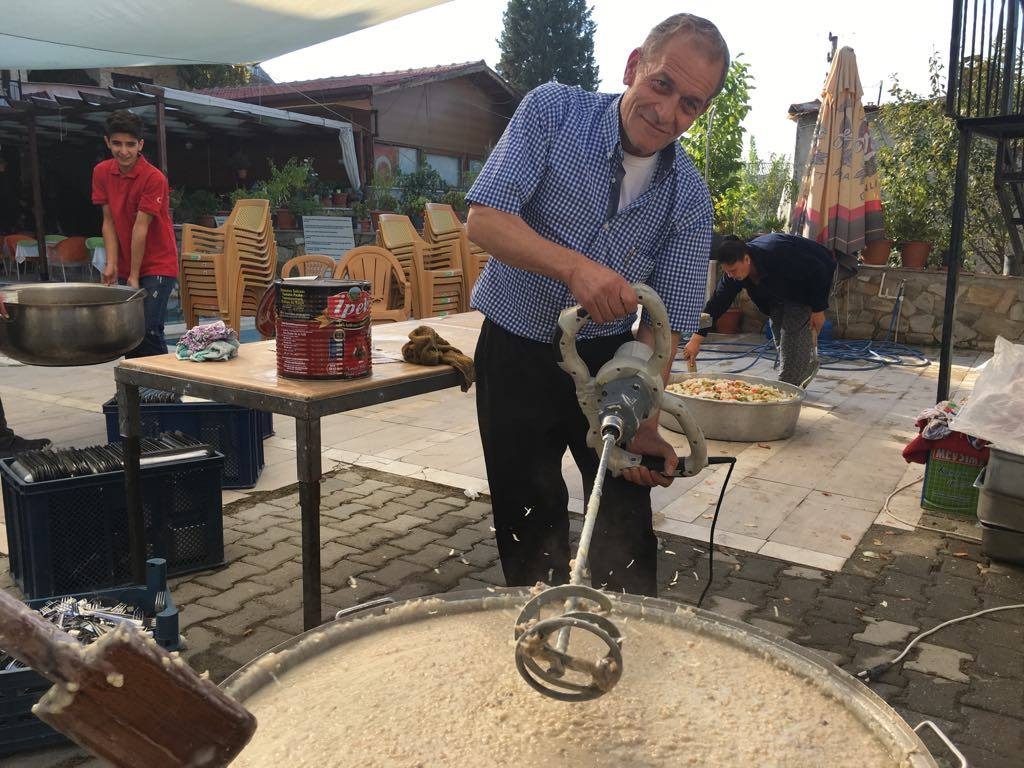 What kind of a blender to you use? This is a paint stirrer being used to cream the Keşkek.

Sue my friend from Australia and I had attended the Henna Night, the eve of the wedding day. We had been invited to stay at the groom’s family home, in Pamukkale for the wedding. That was very exciting for us, to say the least. We were going to be able to participate at absolutely ground level on this one.

One of the groom’s cousins was on duty as night watchman. This meant that he could show us into a room and we were asleep before the late night revellers returned from the henna night which we had left a little early.

In the morning, pretty early, there was a lot of action happening which we could hear from our 2nd floor terraced room. Looking down, we saw trucks arriving with hundreds of plastic chairs and tables. Crates of cutlery, crockery, table cloths, bread baskets and thousands of plastic cups along with slabs of water filled plastic bottles.

We quickly got dressed and came down to see if we could help. No, no, we were to sit down and eat a sumptuous breakfast along with about 30 other close friends and relatives who had come from afar.

Although the kitchen was extremely small for a hotel, in fact small for an average Western family home kitchen, the amount of prepared food coming out of it was phenomenal. Plates laden with bread, olives, cooked and shelled eggs, various cheeses, fresh greens including rocket and parsley, sliced tomatoes and freshly picked peppers along with steaming dishes of extremely spicy garlicky tomato dishes that were more liquid than solid. Perfect for dipping bread into and slurping up.

We wanted for nothing and got to meet a variety of guests. Everyone was amazingly welcoming and we felt very much at home amongst them. They insisted that we were not allowed to help wash up and so we wandered around the pool area where all the tables were being set up. 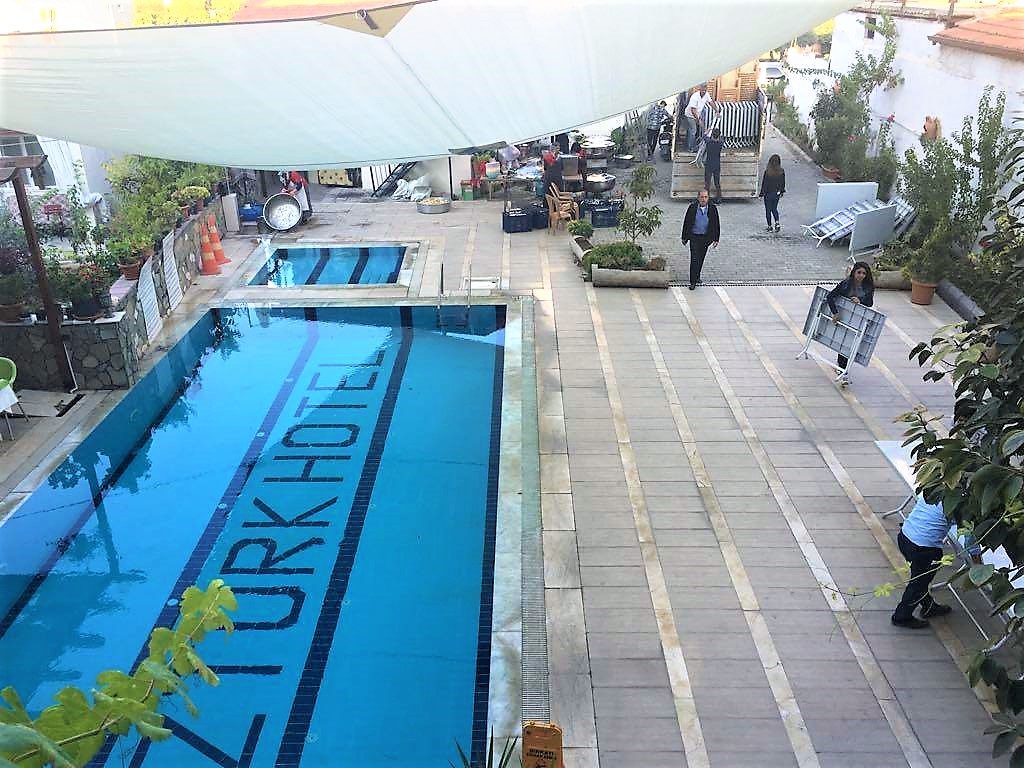 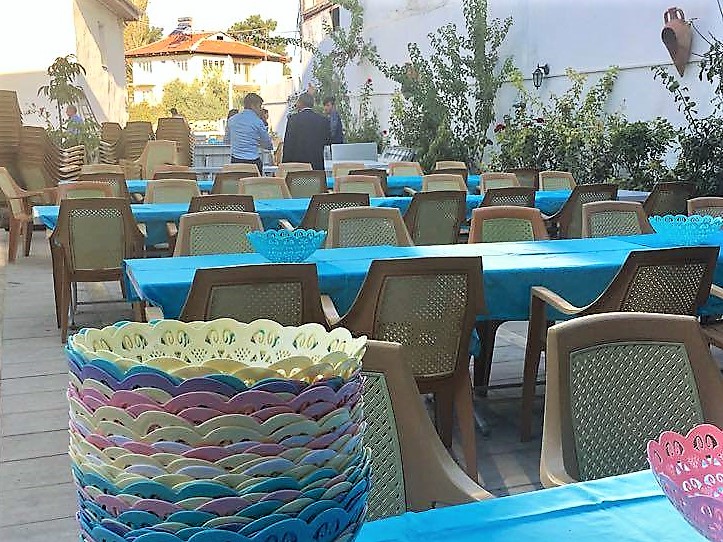 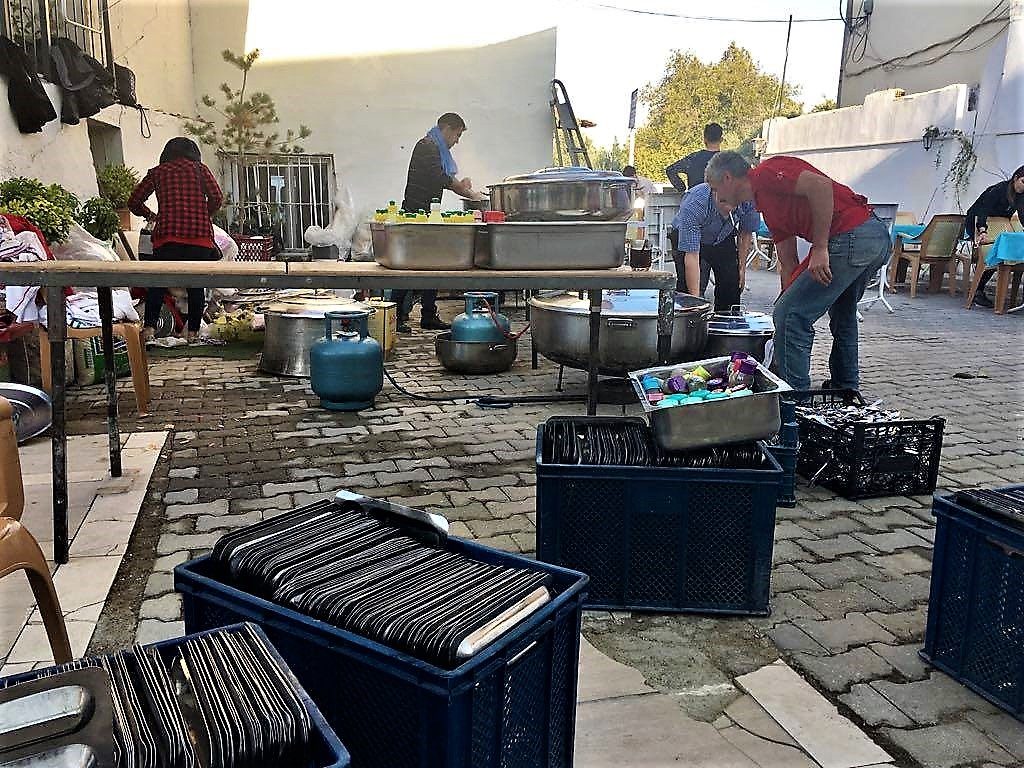 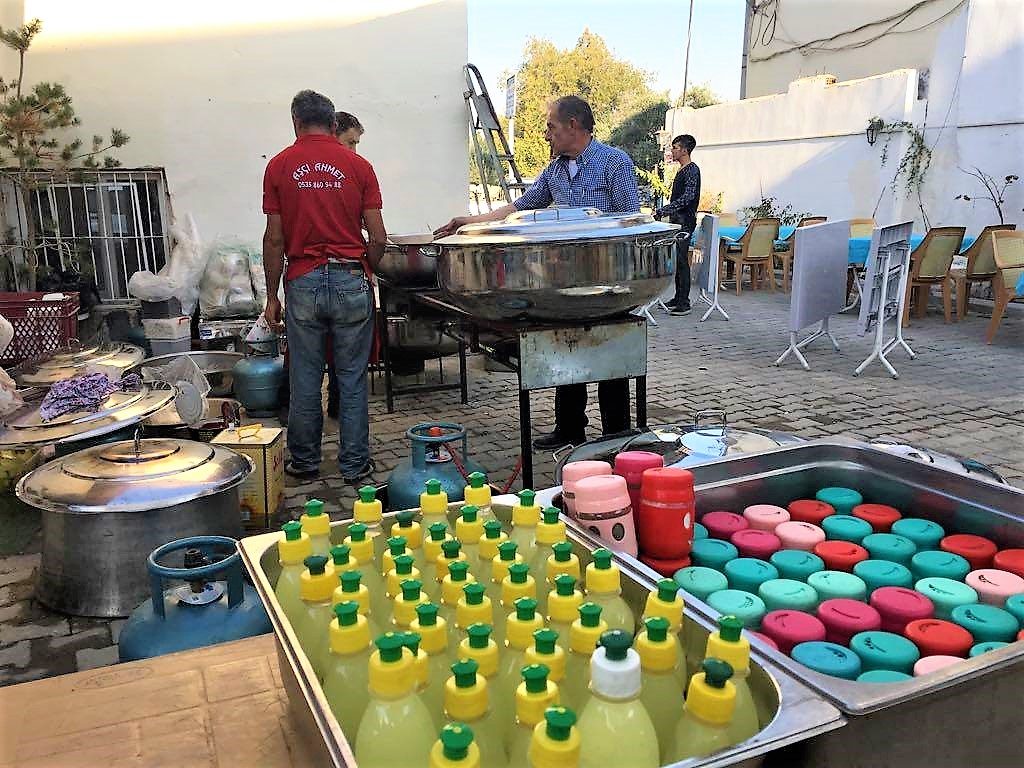 In no time at all, huge cauldrons filled to the brim with various dishes were being heated up or cooked from scratch. The general atmosphere around these 5 chefs, about 8 waiters and helpers was one of relaxed business. They all had time to joke around but kept working at the same time. There was no hustling and bustling whatsoever. It was the most incredibly layback yet busy atmosphere you could imagine. Very impressive. 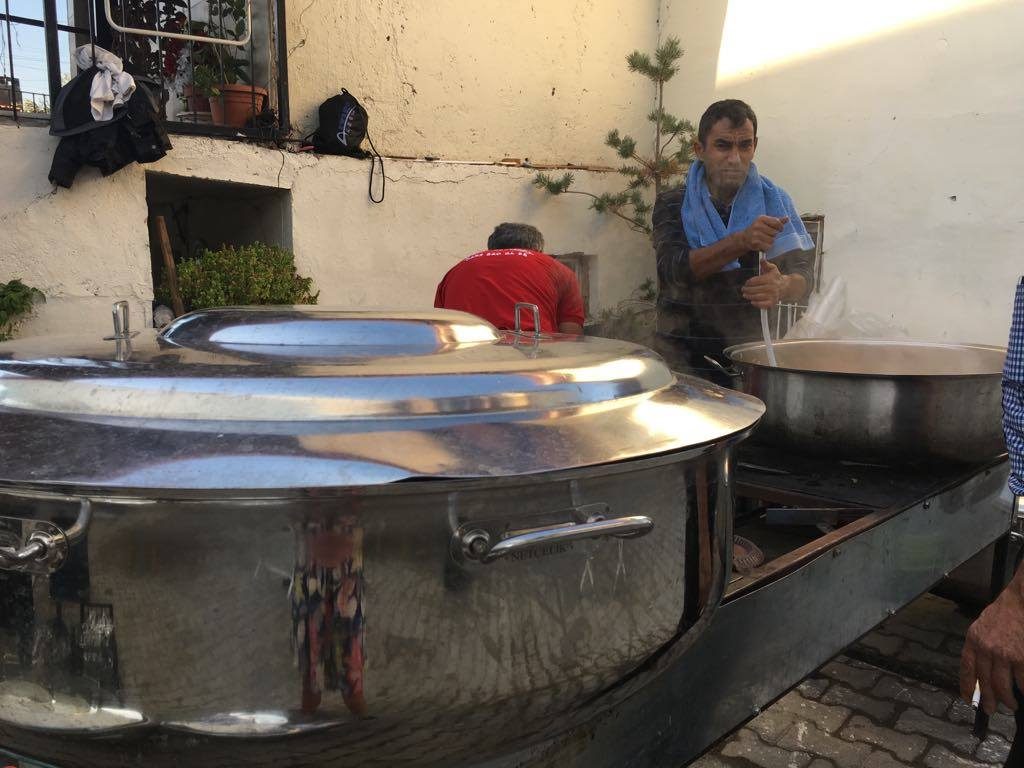 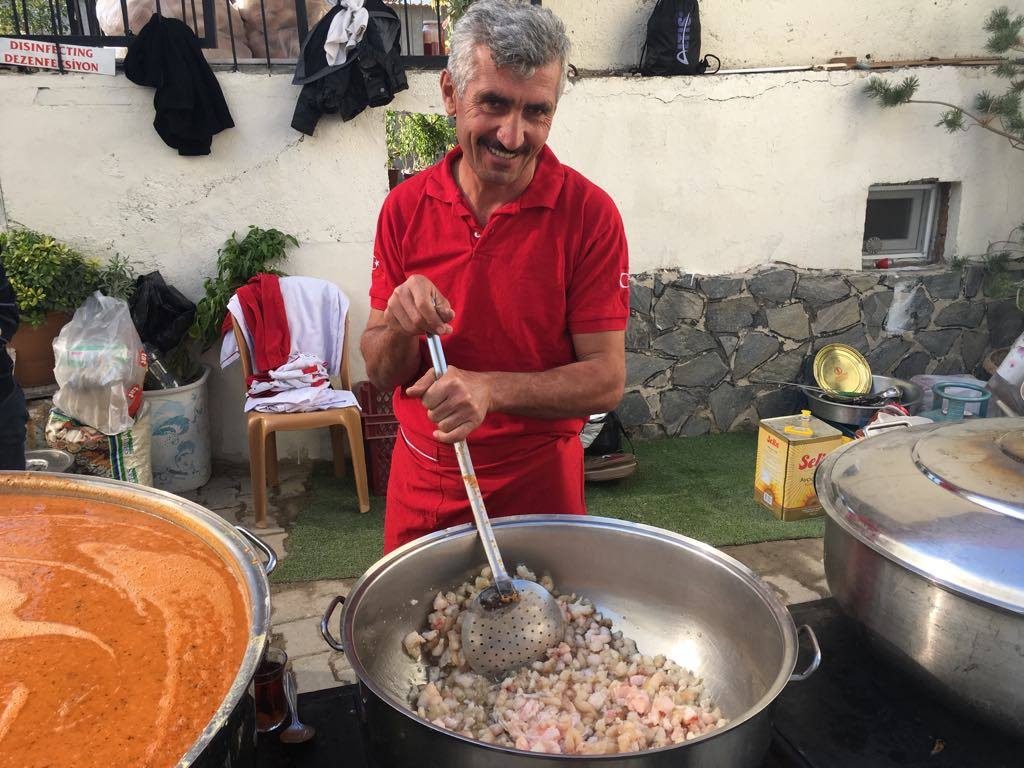 This chef has just started cooking up kilos of cubed lamb’s tail fat, to give flavour to the keşkek. He was a little early putting on his nice red T shirt. By the time the meal was to be served, it was not quite as clean as it should have been. 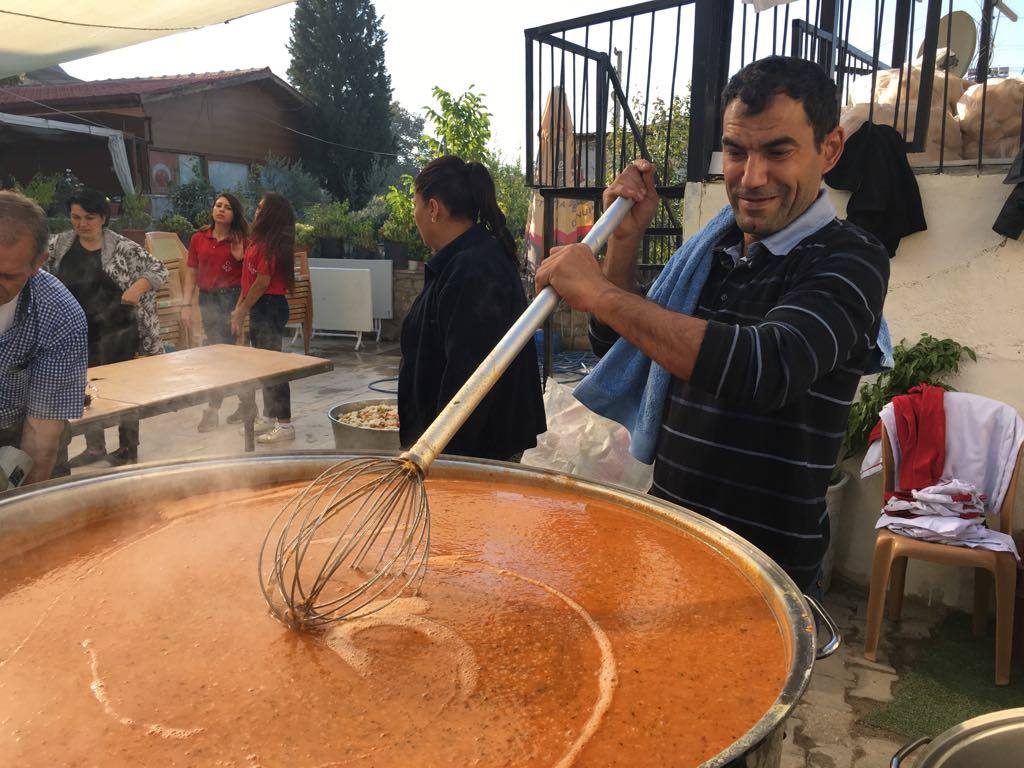 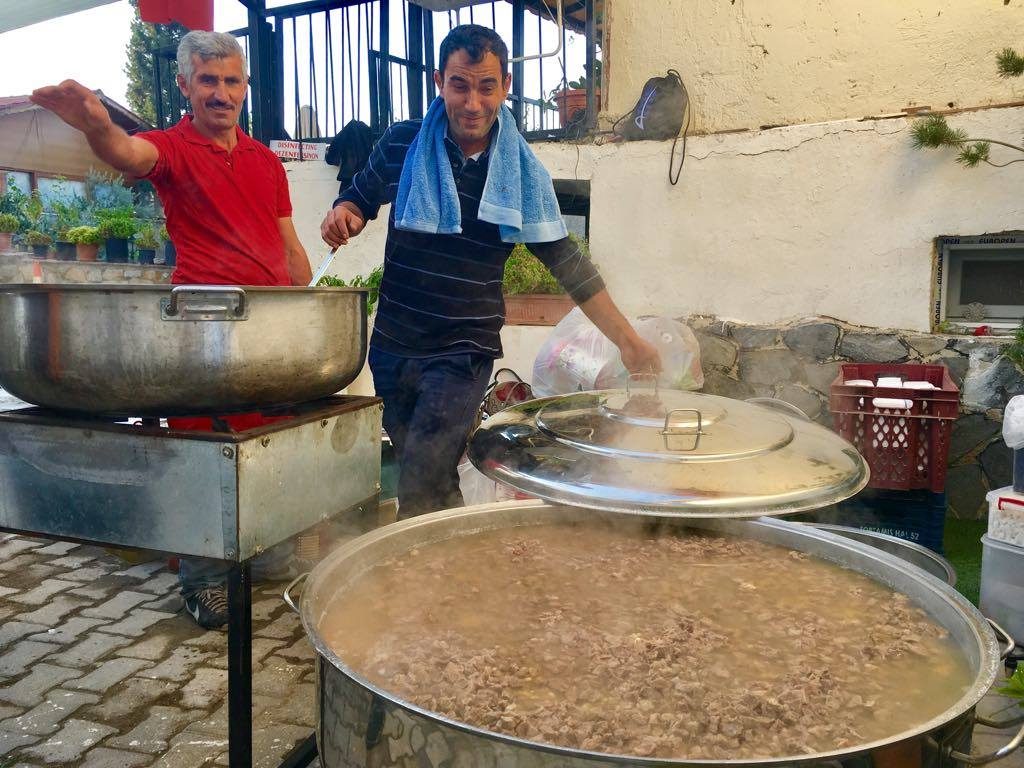 Cooking the lamb for the beans dish. 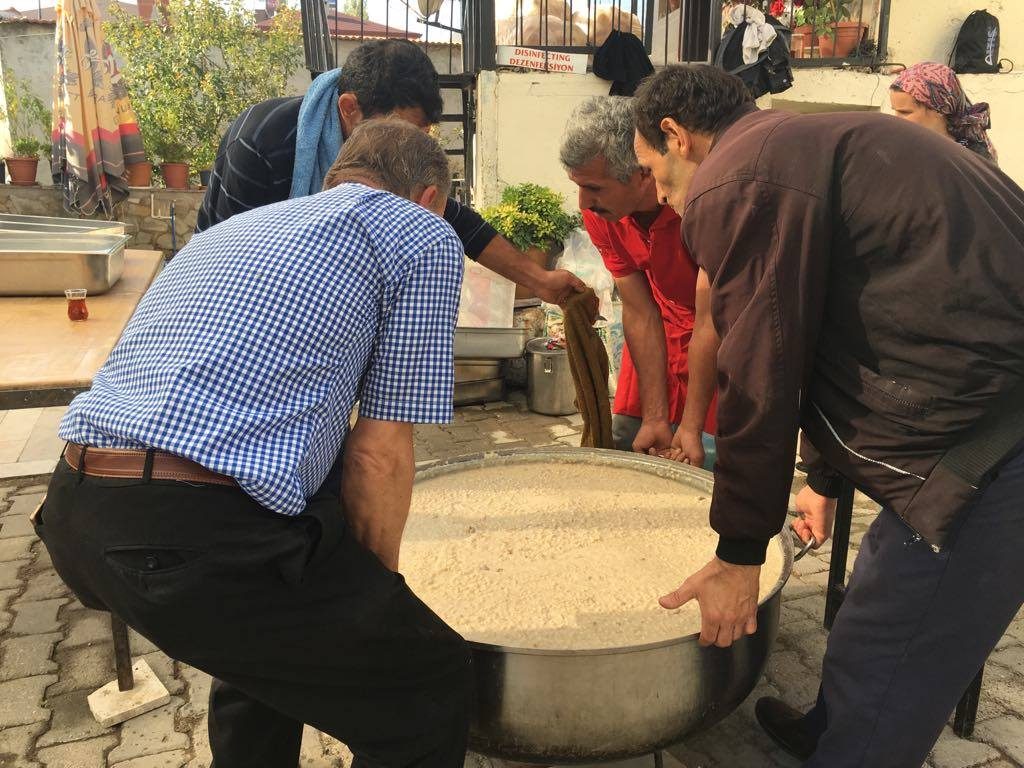 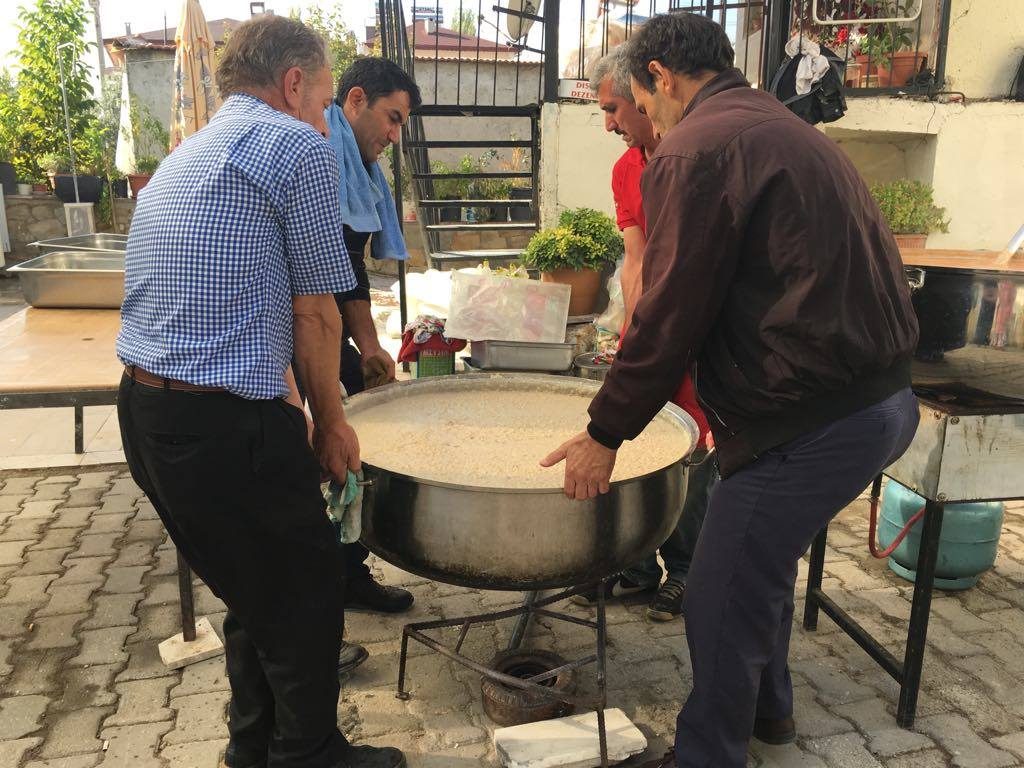 Keşkek for 2000 people doesn’t weigh nothing! 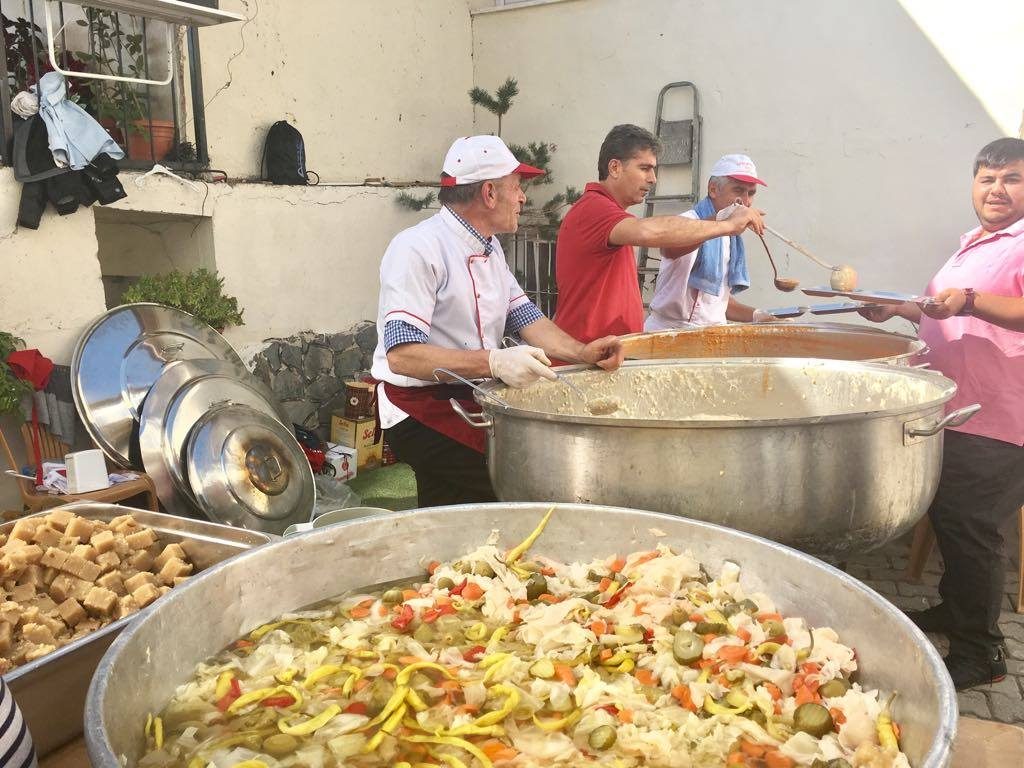 Turşu for the masses – pickled cabbagle, carrot, gherkins and peppers 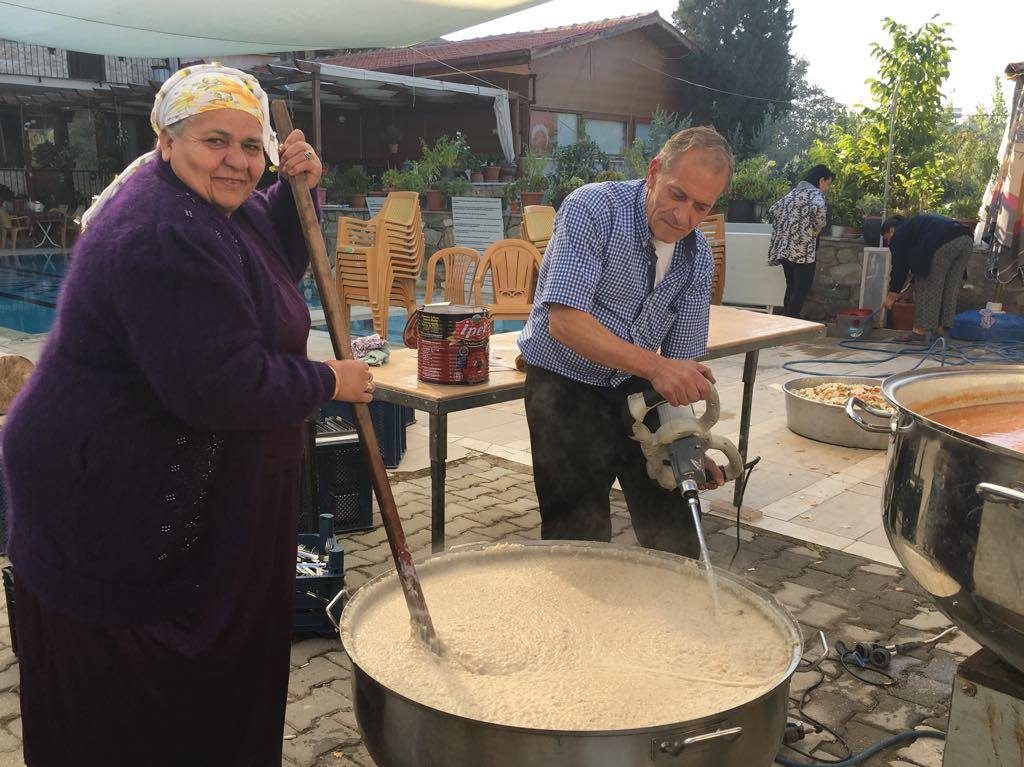 Auntie lent a hand whilst the helper stirred another pot.

Each chef had his own dish and was so proud of it. How they can cook a dish from scratch for 2000 people with only 5 hours prep is beyond me. The whole kitchen team (and I use that term lightly, because there was no sign of a kitchen.) were wearing red Tshirts with a business logo by the time it came to serving the meal. In all my years in Turkey, I had never seen such co-ordination in a village setting. This was mighty impressive. Mind you, some of the female helpers were quite religious and although they wore their T shirt with pride, a long sleeved shirt was worn over it to cover their arms. In temperatures close to 30C I am guessing they were extremely hot as they attended the guests in high speed over the course of the day. 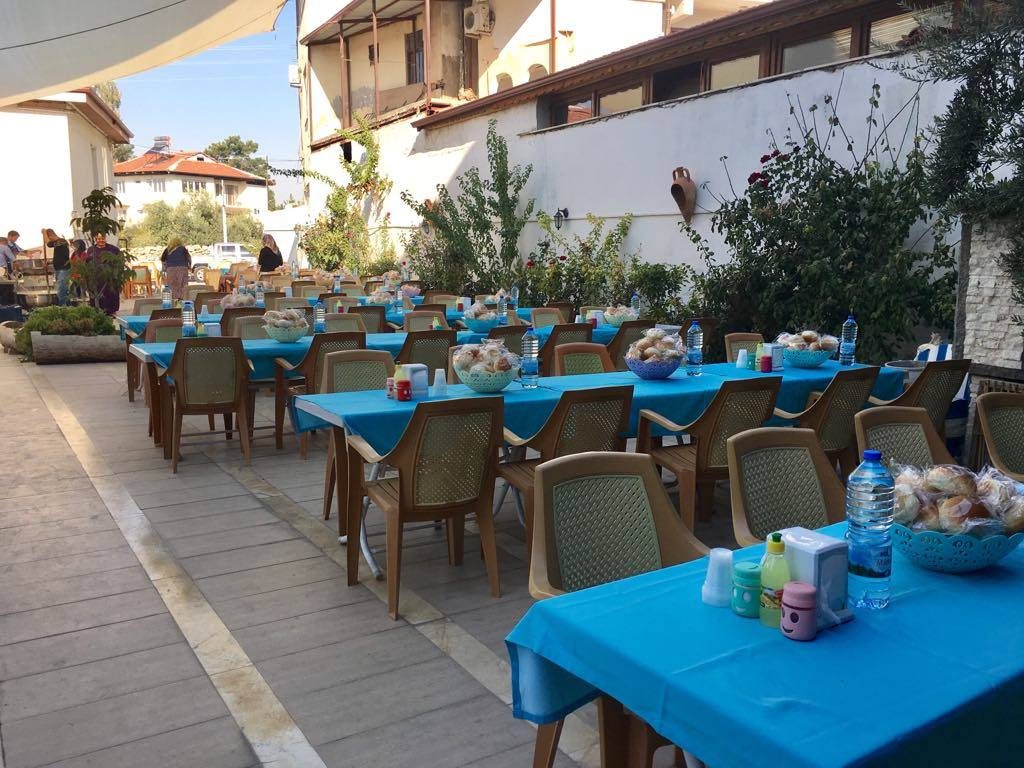 By 2pm the meal was completely ready and smelling delicious. The catering team had donned their uniforms and the tables were looking very pretty, matching the stunning blue of the pool. The wedding was co-ordinated to within an inch of its life. 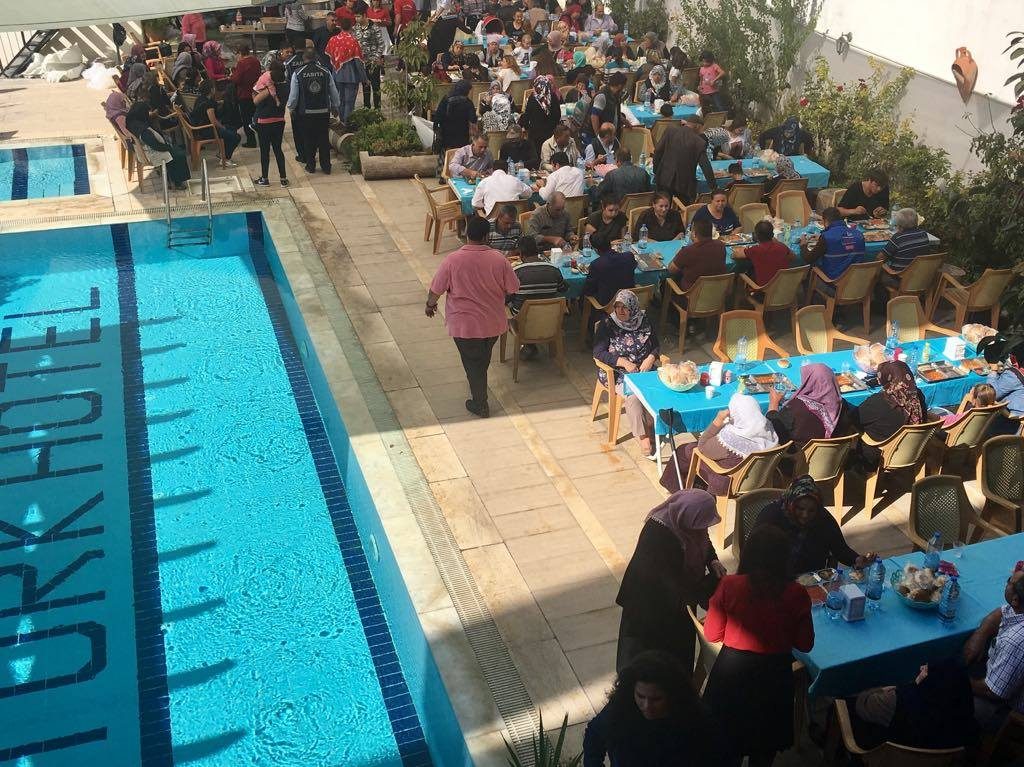 We joined the meal around 3pm once our huge breakfast had settled a little more. We were handed a silver tray with several separated compartments on it, a spoon, fork and knife. We then offered our tray to each chef who dollopped his creation on. We even got dessert – a delicious piece of helva made with semolina and pine nuts.

When it came to the keşkek, I tried to avoid it but the chef simply insisted that I have a  ladleful! I hate wasting food and it looked simply gross but I couldn’t get out of it. I had already joked with him many times as I took photos of the preparations and he simply was not letting me get away with not trying his speciality. 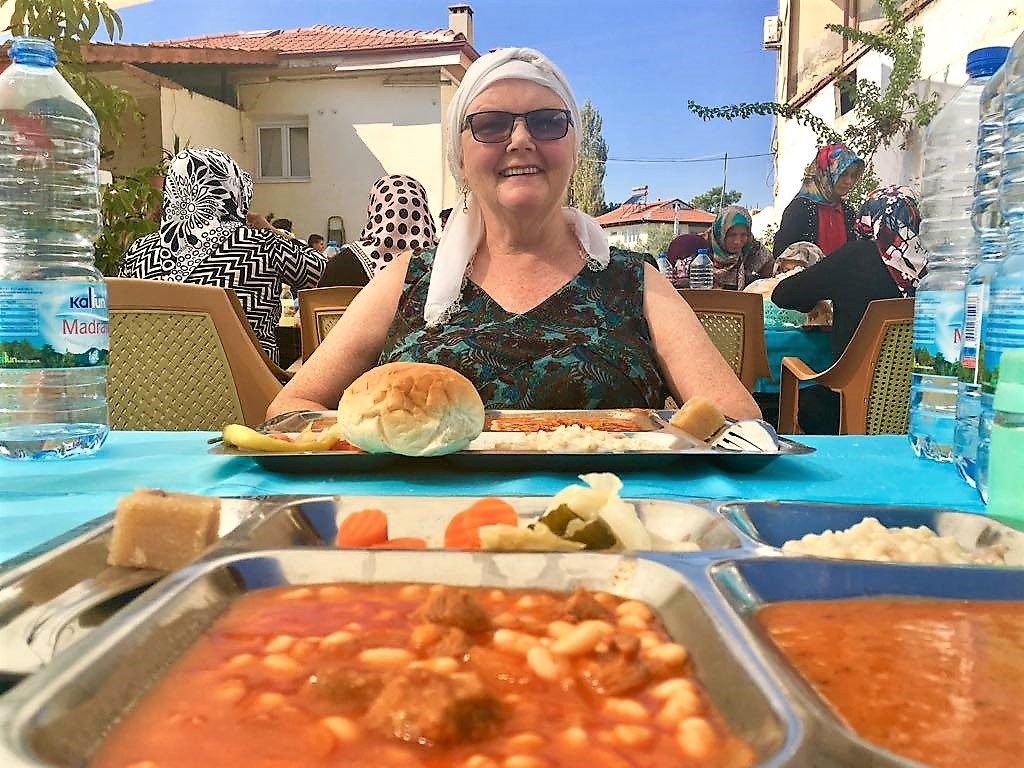 A bit of everything. Keşkek, Bride’s Soup, Beans and Lamb, Pickles and Helva 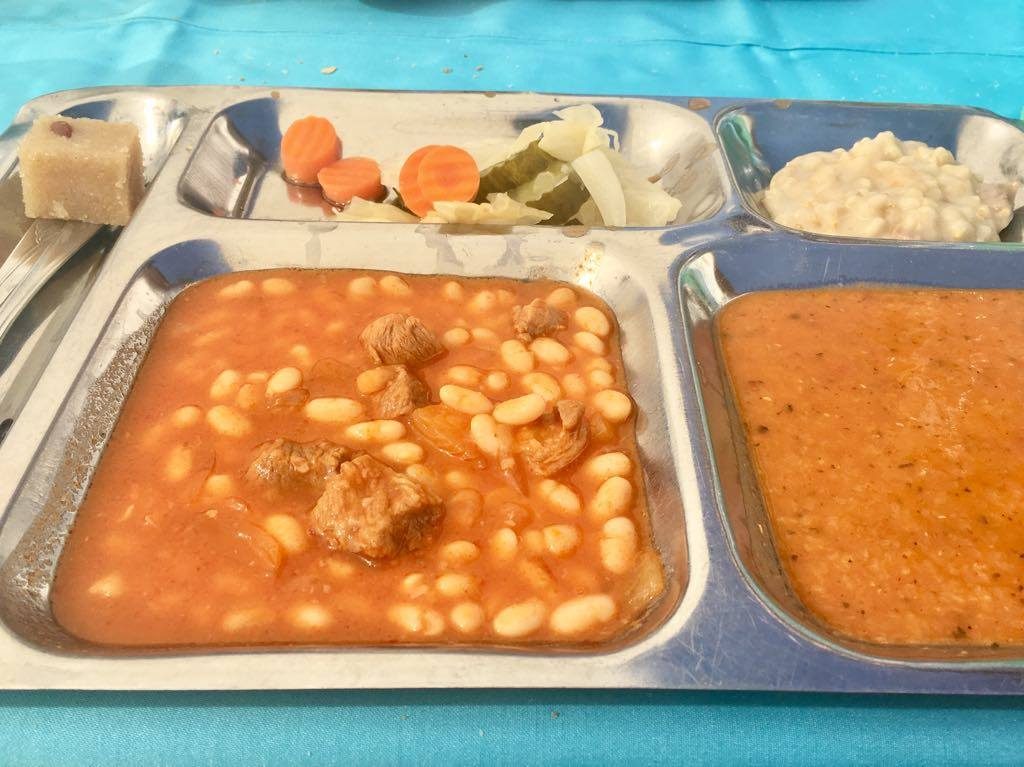 Can you believe it? We went back for seconds. Even for Keşkek!  It was all extraordinarily good.

The crowds died down around 3.30pm and the kitchen was slowly packed up. All the leftover food in the cauldrons was siphoned into various pots and pans in the little hotel kitchen. There was enough for quite a few meals to come.

The trucks arrived, backing in up to the pool and in seconds it seemed the tables were gone and most people were now sitting on chairs outside the hotel, in the little dirt street, chatting. 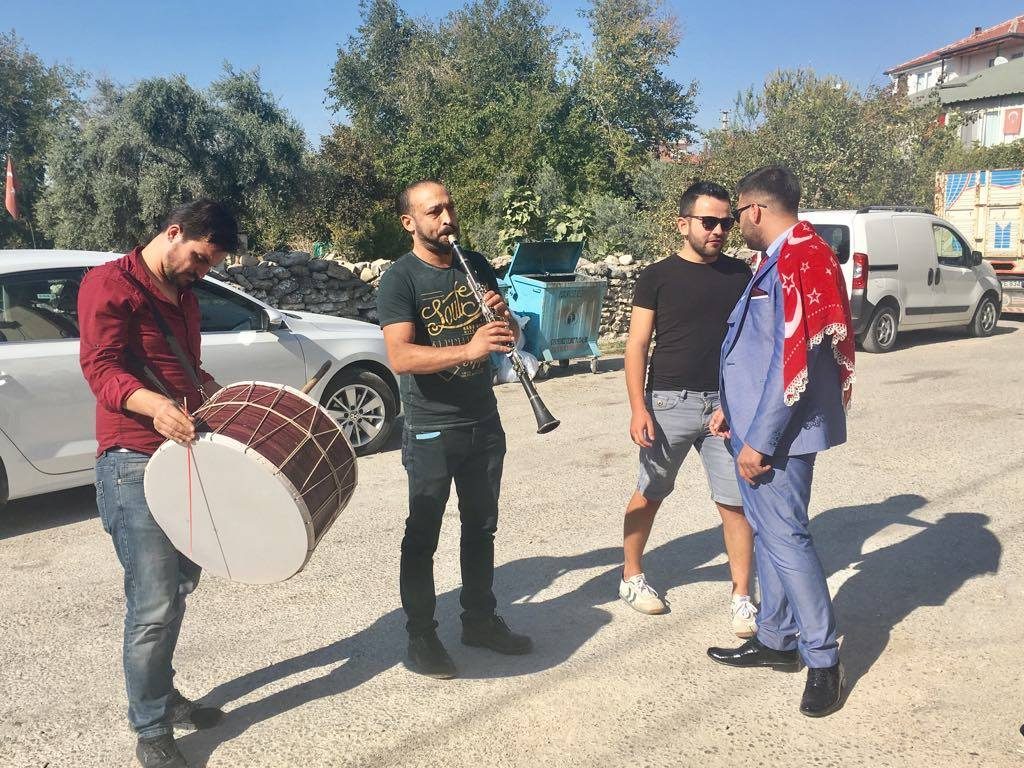 The wedding band played outside the hotel gates. The Groomsman can be found by his Turkish scarf pinned to his jacket. He wore this with extreme pride the entire day and night.

A little band piped up at 4pm. This is what they had all been waiting for. For Sue and me, it was all a surprise. We had no idea how events played out and it was all a learning curve. A few fitting melodies were played and then there must have been a signature tune. All of a sudden, the men started to run. The women grabbed their handbags and extra scarves and they chased after their husbands. Had there been a warning siren? Did I miss some message of doom?

Everyone was abandoning the hotel at great speed. People were madly jumping into cars. Car doors were banging and horns were sounding. I was grabbed and hauled into a van. Feeling half like a hostage, I had no idea what was going on. Women were running round the vehicles, tying scarves of every colour onto the wing mirrors and then in a screech of tyres and clouds of dust, we were off!  In convoy. Lights flashing, headlights glowing and horns beeping.

Where were we going? What was going on? It felt like an orchestrated terror attack. We had the band raising our senses. We had the rifles shooting in the air. The excitement incensed was tangible. We were off on a mission.

The Mission – to grab the bride!!