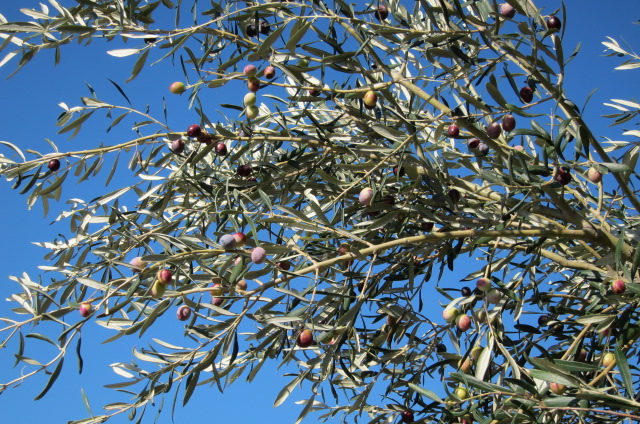 If you have travelled along the Aegean coast of Turkey,  you will have seen scores and scores of gnarled silvery-leafed olive trees clinging to hillsides and lining every little country road. Everywhere you look you see olive groves.  In our area every village family owns at least some olive trees and their living depends partly on the success of the harvest that year. Unfortunately this year despite a promising start, it hasn’t been good due to the excessive heat in August. This income is supplemented by owning sheep, cattle, and by doing other manual jobs –basically whatever they can get. For example, Mehmet is not only our gardener and handyman but the local barber of his village, Paşaköy. 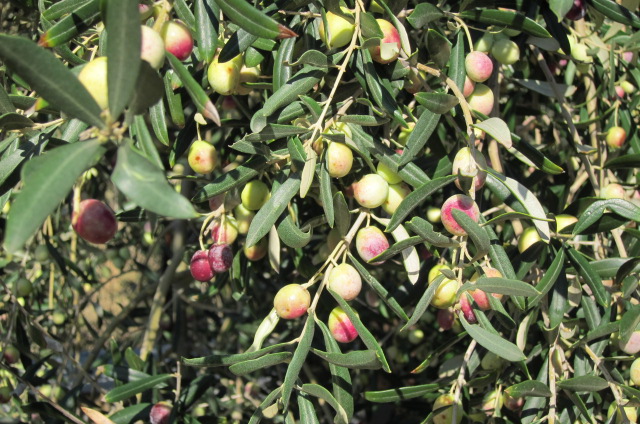 The olive picking season which started at the end of October is almost over and what a backbreaking business it is. When we were in Assos last weekend, the village seemed dead on New Year’s Day not because the villagers were sleeping off their excesses but because they had all gone to zeytin as they say. They were profiting from the fine weather as it was neither cold nor windy.  It takes whole families, men and women, with occasional hired labour to bring in the crop which traditionally they do by beating the branches and letting the olives rain down on sheets of canvas or plastic. 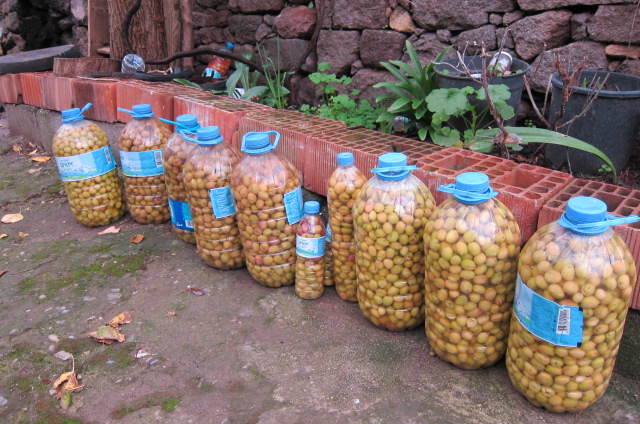 It took me a little while to realize that green olives are simply unripened black ones and not a totally different species. It all depends on when you pick them. When you are next out and about and spy an olive stall, have a careful look: some of the olives will be labeled ‘çizik’ and others ‘kırma’: literally ‘slit’ and ‘crushed’. This refers to what has been done to them and by the way only to green and pink ones. This is done by hand usually which is why these never reach the big supermarkets. Think of the work! They are put in salty water and kept there for 2-4 weeks, the idea being to release the bitter water inside each one which otherwise makes them inedible. 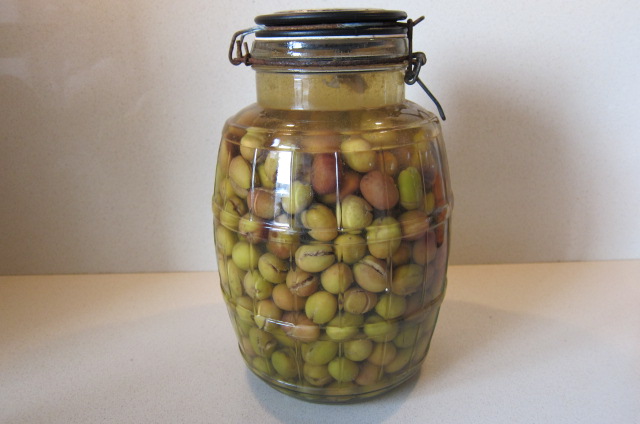 Sele, which is  also the name of the kind of basket in which they are stored, involves a lot of salt. For 100 kg of olives, 10 kg fine salt plus 15 kg coarse salt is added layer by layer on top of the olives. After resting for 2-3 days, the basket is turned upside-down every other day or every 3 days. The idea is that the salt must penetrate the olives and the bitter juices gradually seep out.  After 2-4 weeks, this bitterness will have disappeared and they will be ready to eat. They are sieved but not washed because without that salt, they will go bad. If you buy sele yourself, you will have to soak them in cold water at home before they are fit to eat. In Turkey Gemlik grown in the Gemlik area near Bursa is the most common type of olive and is sold as a breakfast olive or sofralık zeytin.  These are small to medium-sized black olives and are treated in one of two basic ways: sele and salamura. I  have to confess that I was a bit hazy about these myself so doing some reading on the subject prior to blogging about it proved fascinating. 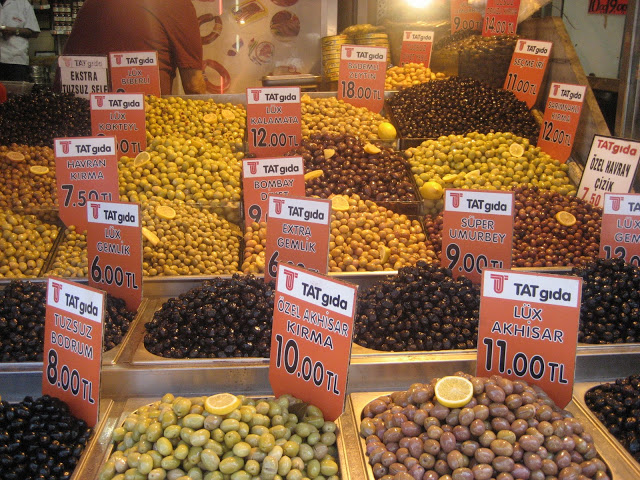 Outside the Spice Market or Mısır Çarşışı in Eminönü

The other method of treating the olives is called salamura, by far the most popular in Turkey, 90% of table olives in fact are treated in this way;  they should be picked when they are dark purple in colour. This method is more time-consuming. It still involves salt but the type of container is different as water is involved. Typically tanks or küp/huge earthenware pots are used. The recipe is to mix 100 litres spring water with 10 kg salt. 2/3 of the tank will be filled with olives. The important thing is that they should be covered with the salamura; contact with air must be avoided at all costs. To cut it short, fermentation occurs and the whole process takes 7-9 months. When the olives are removed from the salamura, they turn black after 3 days of being exposed to the air. 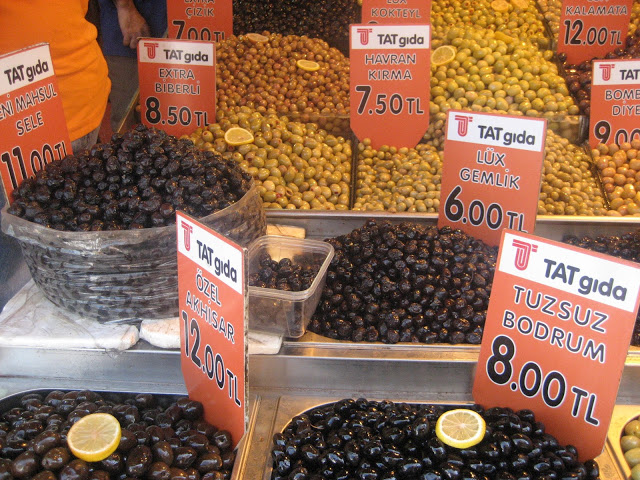 My favourite these days when supplies from the village have been exhausted is Organik from Carrefour: meaty or etli, just how I like them!My advice when buying olives especially initially is to go to a traditional area like Kadıkoy or Eminönü, or the major supermarkets where myriad varieties are openly displayed and you are invited to try. That’s the name of the game: don’t be shy to try not just one but several. The tastes differ enormously. In the end it’s down to personal preference, it’s as simple as that. Just make sure you wash them when you get home. 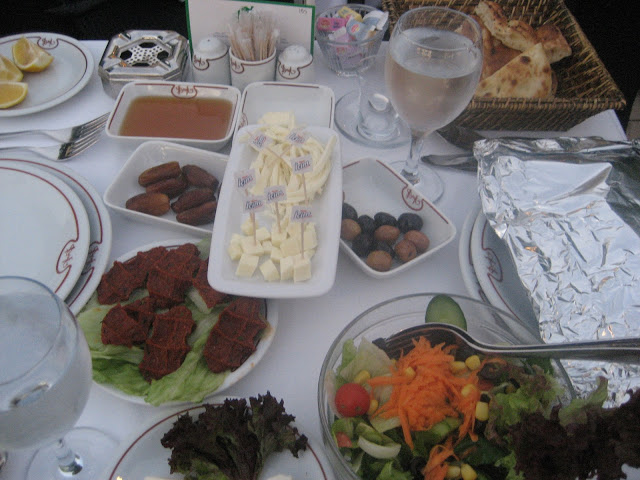 Olives are always a breakfast item except in Ramazan when the fast is broken.