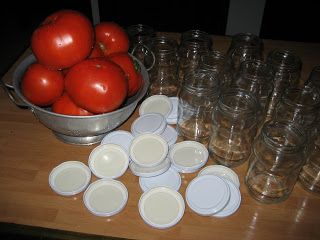 Temperatures are soaring, every day in the upper 30s. It is a very hot summer in Turkey this year and I am loving it.

The tomatoes are just beautiful:  big, fat, red, ripened to perfection under the baking sun.  I am in a village overlooking the Aegean and Friday is market day in the nearby little town.  Today is the day, I thought. It’s now or never to do something with these beauties. First I went to the zuccaciye, ( I love that word!), a treasure trove of a place bursting with household jars, tea glasses, and other necessities of a rural life to buy jars suitable for bottling. I wanted twelve but they had thirteen left so I ended up with thirteen complete with the metal lids. Then I went off to get the fattest juiciest tomatoes I could find. It’s hard to choose which seller to buy from as they all have attractive displays not only of tomatoes but all their other produce straight from their fields and orchards. The heat won out and I decided on the enterprising man with a succulent tomato cut open in front of him who was conveniently close to my car. They cost a rock bottom 1 lira per kilo (33 cents!) which for an Istanbul girl is next to nothing. I bought three kilos.

Home I went and the first task was to sterilize the jars which is most important. There are a couple of ways of doing this: in the past I have boiled the jars but this time thanks to this new recipe, I used the oven method. So far so good. Then I turned my attention to the tomatoes:  I washed them carefully, and peeled them. This year the skin is quite thick and peels off easily, like pulling off a tightfitting glove. Any bits that remained, I used my knife judiciously. Otherwise I would put them in boiling water and skin them that way.

Last year I simply chopped them up and cooked them down a bit before filling the jars. This is fine as you can add the various seasonings like onions, and herbs later on when you are actually using the contents. But this time, following the same recipe, I thought I would make a tastier version. When I saw that my 3 kilos only made 3-4 jars, and because I was on a roll, I used the tomatoes that I had in the fridge so all in all, I made up 4.5 kilos that day, which produced 10 jars. I left about a centimetre at the top of each jar and poured in a little olive oil (we use the oil from Mehmet, our gardener’s, olive trees) and then popped out into the garden to pick some bay leaves. I put one on top of each filled jar and then closed them firmly with the lids. I saw that the girl in the zuccaciye had given me about eight extra lids by mistake so I will give those back next time I go to town.

I had such a great morning! It was so satisfying! I will definitely be making more before the summer is out. I thought these could make good alternative presents for my city-dwelling friends. 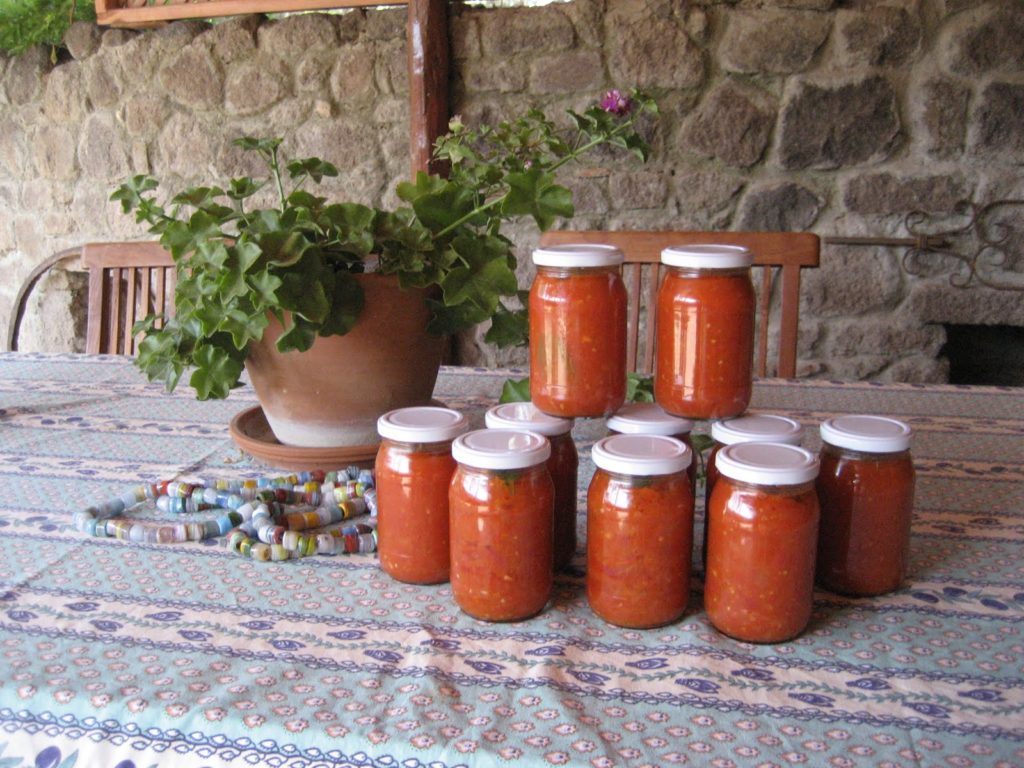 Tip: It really is most important to use the best tomatoes you can find. Avoid those hard ones that you get in supermarkets and that are all of the same shape. They just won’t have the same flavour. But now is the time so go for it!

Next Post: Claudia’s Basic “You Can Do It!” Pastry Recipe »