I am sure you must have known that sooner or later a recipe for İmam Bayıldı would appear on my blog especially with all the aubergine recipes I have been cooking this summer.  With such an iconic name, who could resist doing a post on it?
And yes, best of all, there is a story behind the name!  Or a couple of stories. One is that the imam – Moslem priest – swooned with delight when his wife presented him with this dish, he found it so exquisite.  I love that one.
The other story is that there was an imam who married the daughter of an oil merchant who included 12 huge jars of the very best olive oil in his daughter’s dowry. Her husband liked his food and so as a good wife, every night she prepared aubergine/eggplant with tomatoes and onion in this very special way. Oh how he loved it. But on the 13th night, no such dish appeared as the oil was all finished.  When the imam was informed that there was no more oil for his favourite dish, well, he fainted! I dread to think what happened to her when he came round.
This is another zeytinyağlı or olive oil dish which in a  typical Turkish family is served with or after the main course.  It is a beloved favourite. What I love about it is that it looks so great: aubergine or patlıcan stuffed with a scrumptious filling of tomato, onion and garlic arranged on a platter and served cold.  I used small aubergines as I thought one small one would go a long way. But at the end of the day, use whatever size you like. I know that oil is an issue for many of us including me. I looked at some of my very first Turkish cookbooks and the amount of olive oil they advocate is staggering. No wonder many of us think ugh too greasy. But now I have other sources and I see that there has been a huge breakthrough and much less oil is recommended. But I have to say that my Turkish friends do say that to get the real taste, you shouldn’t skimp. In the end, it is up to you.
Ingredients for İmam Bayıldı or The Imam Fainted
Serves 8
8 small to medium aubergines/eggplants/patlıcan
3-4 tomatoes depending on size
3 onions
8 large cloves garlic
1 tbsp granulated sugar
2 handfuls parsley
2 chopped long green peppers/sivribiber (optional)
½ tsp black pepper/kara biber
1 tsp salt
¼ cup olive oil
2 cups hot water
For frying:
½ cup sunflower oil/sıvı yağ
Method
·         Peel the aubergines in stripes. I kept the stalks but you can remove them if you prefer. For the bitter juices to disappear, soak them in salty cold water for 15 mins. Click Here for more information in a previous post about this.
·         Peel the onions and cut in a half moon shape. Peel the garlic cloves – chop or leave whole.  Peel the tomatoes and dice.
·         Heat the olive oil in a pan and add the onion with the salt. Gently soften till coloured but not browned. Add the garlic, tomatoes, lump sugar,parsley, black pepper and green pepper if using.  Cook over a gentle heat for 10 mins. 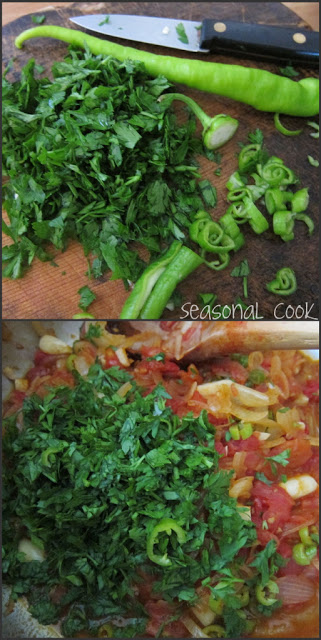 ·         Meanwhile rinse the aubergines under running water and pat dry. Heat the sunflower oil in a pan and fry them carefully,  a few at a time.  When  they are all nicely browned and quite soft, slit them down the middle lengthways and gently prise open. Sprinkle a little salt down the centre of each. Arrange in a clean pan in a single layer.
Using a spoon, fill each one with the sauce. Pour the hot water into the pan from the side. Cover and on a low heat, cook for 20 mins ( the water should be well absorbed).
·         Serve at room temperature. These little beauties keep well in the fridge for a few days.
Afiyet olsun!
Previous Post: « Summer Fruit Drizzle Cake
Next Post: Zesty Carrot and Ginger Cake »