I bought a cookbook last week on the strength of one picture and it was  of this dish.
The book itself – Antakya: City and Cuisine  by Jale Balcı –  looked beautiful filled as it is with enticing colour pictures not only of food but the old streets and neighbourhoods reflecting the cultural diversity and history of this ancient city which we know as  Antioch. It has so fired our enthusiasm that we are now planning a trip there in the spring.
Antakya is in the south of Turkey with Syria as its very close neighbour. It’s one of Turkey’s oldest inhabited regions going back to 5000 BC and is renowned for its cuisine which results from its rich heritage of Seljuk, Arab, Ottoman and Western influences as well as its Central Asian  origins. It’s a spicy cuisine too: thyme , sumac, cumin, cloves, cinnamon, red pepper, black pepper, coriander, grape or date burr – I don’t know this one – and sesame  are all commonly used.  Bulgur seems to be a very prevalent ingredient which suits me. Many of the dishes have extraordinary names like Lahmi Le Varka or meat in paper; Mreyşuşi , a spinach and bulgur dish; and Öcce which are fritters made with courgettes.

Of course the concept of  cabbage rolls or lahana sarma is typically Turkish but they wouldn’t be prepared in this way. These contain no meat so traditionally would be eaten cold or zeytinyağlı. These ones however are cooked with bulgur – most unusual as normally rice is used – and eaten either hot or warm as a main course. I love the simplicity of the ingredients: what is there after all? Only cabbage and bulgur  with spices and fresh herbs. I found the specified amount of salt insufficient so add more at your discretion!

The pomegranate molasses or syrup is a very important ingredient here. Apparently in Antakya, children pour it onto their olives and tomatoes as well as  dip their bread into it for breakfast. A far cry from cornflakes!  I think nar ekşisi can now be found relatively easily outside Turkey. Inside Turkey buy it from the local markets if you can: this is the season when the villagers make it. Otherwise there are all the commercial brands available in the supermarkets but they contain additives.

Of course the first challenge was the cabbage. Believe it or not, this was the smallest one my local greengrocer could offer me! It was a beauty but huge! When I was cutting it up the kitchen was awash with cabbage leaves. This was the hardest part of the entire procedure! There was loads left over which I have given away.

·         Separate the cabbage leaves and plunge them, 5 at a time, for 3-4 minutes in boiling water. Drain and cool. Cut out any hard veins if necessary. If the leaf is very large, cut in half. 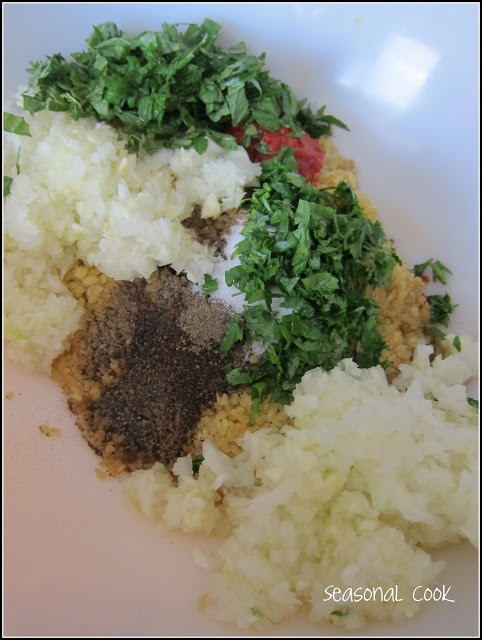 ·         In a large bowl, mix all the ingredients for the stuffing minus the 1 tsp tomato paste with your hands. Take one cabbage leaf, add some of the stuffing mixture and roll up. In these sarma, the ends are not folded in but left open.  Place carefully in layers in the pan.

·         Add just enough water mixed with the tsp tomato paste to cover the rolls. Cover the pan with the lid and cook over low heat for approx 25 mins or until the bulgur is cooked. (test a grain or two). Add more water if necessary. 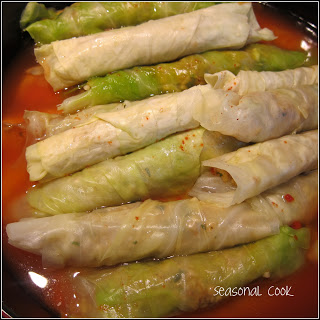 ·         To serve, gently heat the olive oil and add the garlic. Cook briefly and then add the dried mint. Drizzle over the cooked cabbage rolls and serve.
Tips

1.   Gently squeeze each sarma as you finish rolling so that the leaf stays in place. Trim the ends if they look a bit raggedy. You’ll find they retain their shape beautifully.

2.   *I couldn’t bring myself to use all that olive oil for the sauce. It’s up to you how much you want to use. I also didn’t use the 5 garlic cloves.
3.   But overall, this makes a mighty nice  vegetarian supper dish! I served it to Turkish friends a few nights ago and they were most impressed! Try it and see.
Previous Post: « I am a Versatile Blogger!
Next Post: Annual DOBAG Rug Sale in Istanbul »